Funny, a new Intel Core i9 9900 SKU has surfaced in an AIDA changelog listing, now each of the suffix letters has a meaning, but really combined this is the Core i9-9900 KFC edition, fastfood anybody?

The three letters of the suffix all have a logical meaning, but here they are contradictory. The K stands for an unlocked multiplier so it can be changed better. F means the absence of an active integrated GPU. The letter C, however, was used in the Broadwell generation, where it stood for an integrated GPU enhanced with eDRAM. So it’s a bit of a clusterfrack.

The KFC combo is therefore contradictory unless the letter C specifically refers to the presence of eDRAM between the CPU and the l3 cache. Other information that the SKU name is not known. However, we can expect this to be another variation of the current Core i9-9900KF, so with eight cores and sixteen threads and maybe a side dish of grilled chicken breast. The list has already been deleted from the change log. Who knows it was a typo. 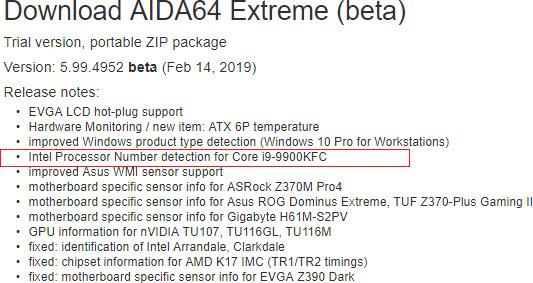 Intel Core i5-9400F processor Back to thermal paste, no soldered heat sink – 04/02/2019 10:11 AM
One of the things that has become evident is that enthusiastic end users love a processor with a soldered-in heat sink. it helps cool things down. As such, the Core 9000 series had that, except that …